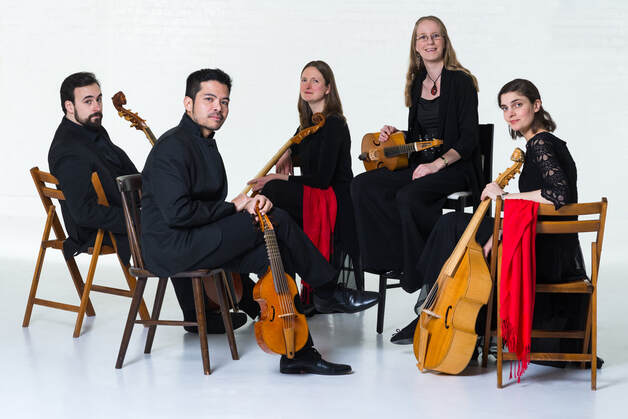 The haunting sound of gut strings has rarely been captured with such beguiling fidelity, nor the unique tonal proclivities of a viol consort so exquisitely voiced - The Strad
Described by Gramophone as having released 'unquestionably the most beautiful recording of the Lachrimae', Chelys have garnered a reputation for their faithful yet fresh interpretations of the consort repertoire. They take their name from an ancient Greek word which referred to a bowed lyre, said to have been invented by the god Hermes. The word was borrowed by the English violist Christopher Simpson on the title page of his treatise 'The Division Viol' when he translated the work into Latin. Perhaps this is what inspired their world premiere recording of Simpson's Airs for two trebles and two basses, a disc described as ‘wonderfully supple, propulsive and alive’ by the Guardian.

The members of Chelys are among the UK’s leading exponents of the viol, particularly as a consort instrument, and their consort viols are strung entirely in gut (not strings overwound with metal), which lends them a particularly distinctive sound. They frequently collaborate with other period instrumentalists and singers, especially enjoying repertoire for voices and viols. A recent highlight has been a project with vocal consort Fieri, performing and recording the complete 5-part viol fantasias of Michael East alongside some of East’s compositions for voices and viols. The two ensembles also commissioned a piece from composer Jill Jarman, to celebrate writing for voices and viols 400 years after East published his pieces. Continuing their association with Jill Jarman, an exciting current project is The Language of Bells, a major new commission alongside percussionist Dame Evelyn Glennie and four singers.

The consort record for the BIS label, and their version of the complete fantasias and in nomines by Henry Purcell has just received a 5 star review in BBC Music Magazine, as well as The Strad praising its 'beguiling fidelity' and 'in-depth luxuriousness'.

The members of Chelys can be found in all sorts of other places in the wider Early Music world: playing with ensembles such as the Rose Consort of Viols, Fretwork, Musica Secreta and Ensemble Moliere, teaching on courses including the Benslow Trust, NORVIS, Dartington, the Irish Recorder and Viol Summer School, and the Easter Early Music Course, and coaching viol consorts at the Royal College of Music and Oxford University.